Why do so many drivers these days act as if they possess no common courtesy for others on the roadways? Does having control of a ton or more of motorized metal compel people to be pricks? Being behind the wheel turns off the kindness switch in so many people that I’d say we’re in the midst of an epidemic. It’s not something that afflicts everyone; yet, it occurs so frequently that I believe that we’re moving from pandemic phase five to the worldwide catastrophic phase six of aggressive automobile acrimony. I guess you could just call it road rage, but that would be too easy.

Well, over the past few years of my life, I’ve lived and driven in Washington, DC, southern California and now Abu Dhabi in the UAE. Driving in each of these three locations appears to be a hazard to one’s health and it’s due to the increasing number of selfish, power-tripping vehicular stupers (which is short for remarkably stupid persons). I’m particularly miffed by one inane driving behavior prevalent in all three of these areas: cutting off people who signal to turn into one’s lane. In these locales, tumultuous turn signal tactics are a daily occurrence and I have fallen victim to this punk-ass behavior far too many times.

I’m not referring to people who try to cut into a lane when there’s less than a car length of space available for the maneuver. No, I’m pissed off at those moments when I have more than enough room to enter the neighboring lane, signal to get over and then, suddenly the driver of the car behind me, in the lane that I wish to enter, punches the gas upon seeing my turn signal. What?!?! The driver speeds up to cut me off and keep me out of the lane.

Why? What is the person thinking? “Oh, no, you’re not getting in front of me!” Or is it, “Hey, that signal on the other car is pointing me in the right direction. I should pull up there next to that car, where that signal is pointing.” 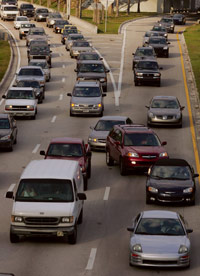 Hmmm, maybe the person says, “Oh, no! Not my Acute Photosensitive Crural Spasmodic Disorder (APCSD).” This is an increasingly common malady which causes the quadriceps to cramp up when the retina is exposed to a blinking light; thus, forcing the person to inadvertently push the pedal to the metal.

Not only have I seen these rude turn signal cut-offs as someone attempts to change lanes, but also as people are merging. If an inconsiderate driver doesn’t let the person merge into the lane, it often causes the other lane to significantly slow as the lane-changing driver awaits a safe opening. Now an entire lane of drivers behind the patiently signaling driver are forced to slow, too. Ugh! As I’ve mentioned before, when I faced a Canadian Roadblock, my mantra behind the wheel: “Maintain the flow!” Those whose don’t, slowly kill the driver’s soul.

OK, I know some of you are thinking I’m overreacting, but you must be people that live in small towns or regions generally populated by passive people. In moderately-sized cities to large urban areas there’s an increasing number of people who blatantly disregard the fact that the asphalt upon which we travel is shared by everyone. Whether it be a road, alley, roundabout, parking lot or freeway, it’s there for all.

Are you a road raging individual? 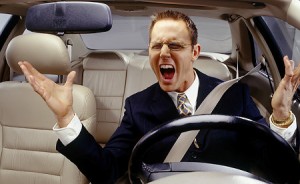 Take this road rage quiz to receive an analysis of your driving profile which rates your levels of safety, aggressiveness, courtesy and rage. If you are an aggressive driver and need to chill out, implement the advice on Edmunds’ Top 10 Tips To Prevent Road Rage.

Have you noticed aggressive automobile acrimony on the rise? Ever fall victim to APCSD while signaling to change lanes? What’s your take on all this? Feel free to add your own story with a comment.